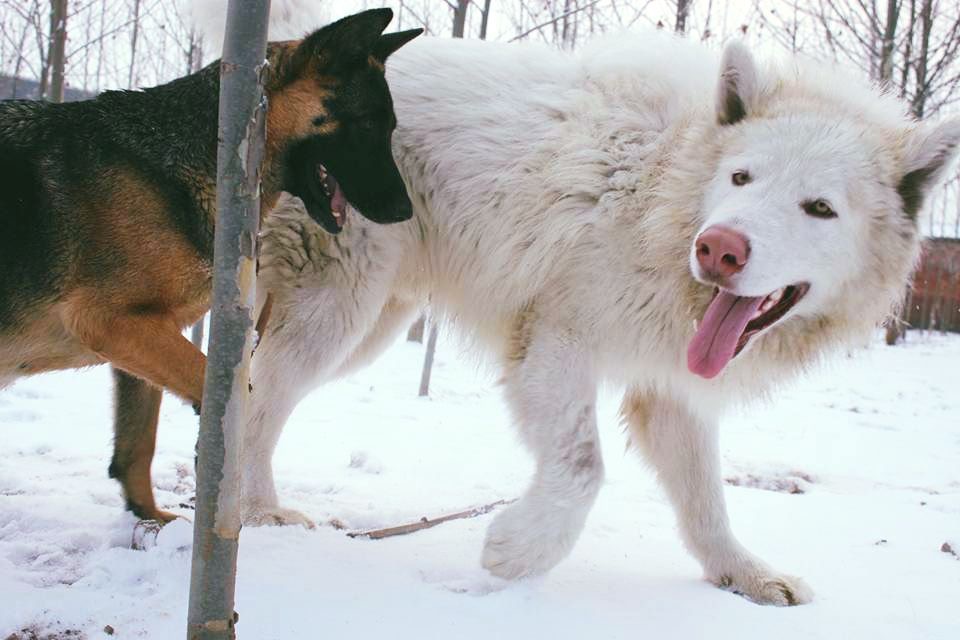 No Dogs Left Behind spends every waking hour saving dogs that have been stuffed into small butcher cages and brutally tortured.  Every day thousands of dogs are packed into these rusty cages and shipped off to slaughterhouses to endure a brutal and unimaginable death at the hands of vicious, soul-less it seems, butchers who are simply trying to make a quick buck. 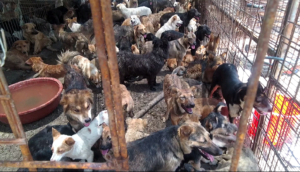 In some cases, Jeff and his team are able to shut down some of these slaughterhouses with the help of authorities.

During a 2016 Yulin slaughterhouse shutdown, Jeff instantly connected with a German Shepherd named Ali, who would unknowingly, at the time,  play a vital role in Jeff’s everyday operations by becoming a protector and guard of not only the shelter but the staff and volunteers, and most of all, Jeff.

The bond that Jeff and Ali formed was inseparable, and Ali soon became Jeff’s closest companion and friend.

Jeff happened to be in Los Angeles, California at the time but his most trusted staff member Lia Lee was there with camera in hand, filming the entire shutdown live so that Jeff could watch.  Ali happened to be one of the first dogs the rescue team got out of the cages and a soon as Jeff saw her it was love at first sight.

Jeff couldn’t wait to get back to meet for the first time this beautiful dog that had just been saved from a certain death.  He even would “talk” to Ali over the phone using a very distinctive whistling sound so that when he finally did arrive, Ali would recognize him right away.

When that incredible day finally did arrive, as Jeff was walking up to the shelter in Naning, he called to Ali with his whistle and Ali came enthusiastically running while having to jump over a six-foot fence just to come and meet Jeff for the first time.  It was a beautiful moment that Jeff would never forget in his mind, and from that day forward Ali never left his side.

Shortly after the Yulin 2016 slaughterhouse shutdown, there was a retaliation and some Asian people broke into the shelter and stole 60 dogs.  After that night, Jeff knew that he needed someone to protect the shelter from further disasters.

After that incident, Jeff decided to bring Ali home to the shelter and in order to watch over him and the other dogs at the shelter.  She traveled all over East Asia with Jeff and accompanied him to emergency responses, when he went to the bank, and even when he went to grab a bite to eat in town.

Because Jeff was traveling everywhere with her, he decided to get her certified and vaccinated by the Chinese government so that when Jeff was out traveling with her, the police couldn’t stop them and try to kill Ali on the spot, like they are notorious for doing to dogs without official papers and vaccinations.

Ali became extremely important to not only Jeff’s safety but the safety of the other dogs in the shelter.  Every morning at 6 am Jeff would release Ali into the shelter yard so she would patrol the perimeter and check that everything was in order.

Since the entire shelter is covered with security cameras, occasionally Jeff would release her in the middle of the night if he saw anything or anyone trying to get in.  A few times she came back with clothes in her mouth!

On the other side, Ali became Jeff’s support system.  She would sleep with him on floors at night when Jeff was too exhausted from the day.  She would lick the blood from Jeff’s bleeding hands from the work he did saving scared and frightened dogs from cages after an emergency rescue. And when Jeff was in tears from hearing the cries of dogs and seeing the faces of these innocent creatures being tortured she was there to lick the tears from his eyes.

Ali was truly everything to Jeff and his lifeline through tough times and dangerous times.  She even became known as “Ali-mama” because of her unbelievably loving nature towards puppies.  Though she was a vicious alpha female that protected Jeff, she also had a motherly, nurturing side that made her truly amazing.  Any other dog, Ali would tear apart and attack because that was her job to protect the area.

Soon villagers and other people knew that Jeff could not be messed with because he had a guard dog by his side at all times and if they tried anything fishy, they are doing it at their own risk.  Ali was officially one of the bodyguards that Jeff relied on for protection for several years until recently when Jeff decided he needed to get her out of East Asia due to the recent crackdowns. 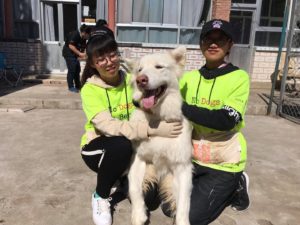 There is one more dog that needs to be mentioned as a protector of the shelter and this is Gigi.  Gigi was an owner surrender that was heading to Yulin Dog Festival.  One of the staff members, Lia Lee, became very attached to Gigi and fell in love with Gigi instantly. Lia used to call Gigi her “Gigi-ma”.

Lia, similar to Jeff, had a hard time letting Gigi go but knew it was the right thing to do in order for Gigi to have the life she deserved.  But because of the dangerous situation in East Asia because the authorities could come at any time and confiscate Gigi because of her size.

Gigi had a thunderous bark and was actually quite a bit bigger than Ali, but still, Gigi was no match for Ali.  Gigi was sweet and playful and good with other dogs, but if people came to the shelter they would get afraid because they would see this huge, Alaskan Malamute coming and they would turn around and go back. 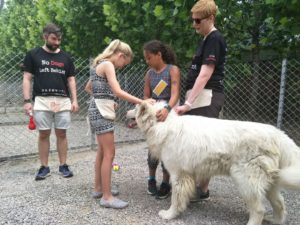 Both Gigi and Ali were confined to very strict schedules at the shelter and never got the chance to be a “real dog”.  They never had a chance to play and do what normal dogs do because they were always on call.

Gigi and Ali rotated nonstop, morning and night, guarding the courtyard and the hospital areas. And if something was sensed on the cameras, they were released. 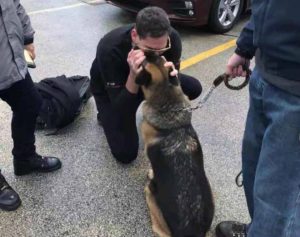 Jeff and Lia’s emotional bond with Ali and Gigi made the decision to get them out of East Asia bittersweet and extremely painful.  Tears of sadness and joy streamed down Jeff’s face as he kissed Ali goodbye in Chicago and handed her over to her new loving home.

Tina Wengren, a previous adopter of “Foxy” and supporter of No Dogs Left Behind,  was the one who made the entire adoption possible. She was the one who found a home for both Ali and Gigi.

Tina has been so touched by the joy the Foxy has brought into her and her families’ life that she continues to work with No Dogs Left Behind to find homes for much-needed dogs from the shelter in East Asia.

Gigi was so big, that Jeff had to put him on a crash-course diet so he wouldn’t be overweight for the plane ride home!

Before these guard dogs could come to America, Jeff had to do an extensive amount of work with them in retraining them how to become docile-type dogs again.  He took them through several months of obedience training, which Jeff did himself, as the dogs were waiting to fly out to Chicago. 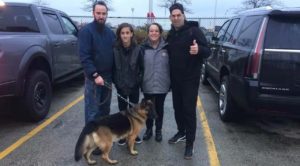 Not only did the dogs have to be reprogrammed, Jeff had to educate the families that were going to adopt Ali and Gigi.  He talked to them about the very strict rules when they have Ali around other dogs, for example, and making sure not to give them free rein over public places.

Jeff told the families about the stories of Ali and Gigi and the work that they had done in East Asia and the role they played.  This was crucial in preparing the families for what they were about to embark upon with these two dogs.

As an example of the retraining that Jeff had to do with these dogs, when Jeff was in the airport with Ali and Gigi, a few bomb-sniffing dogs walked by Jeff and his two dogs.

The bomb-sniffing dogs were completely docile and didn’t even pay much attention to Ali, Gigi, and Jeff.  But naturally, Ali was in protection mode and wanted to attack, as she was used to doing with other dogs because that was her job in East Asia. 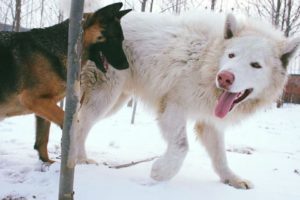 Jeff ended up speaking to the officials and telling them the stories of Ali and Gigi and by the end of the story the officials were praising him and thanking him for the service that he was doing to save the dogs.  They were so appreciative and high-fiving Jeff to show them their gratitude.

It’s because of Tina Wengren that Gigi and Ali found loving homes.  When Jeff arrived in Chicago with Ali and Gigi Tina and her family and many other supporters were there waiting with signs and everyone was crying just knowing the courageous stories and how these two dogs had served and protected Jeff and his team for so many years

Jeff spent several hours with both adopting families and even worked with the kids and giving them the do’s and dont’s of working with dogs such as Ali and Gigi.  Once that was over, his heart was filled with sadness, and he reached down and grabbed Ali by her face and kissed her goodbye for the last time.

Jeff says he will definitely be coming back to Chicago to visit his beloved Ali and Gigi.  But for now, he’s spending every waking minute of his time trying to get the other dogs out of the shelter that are stuck in East Asia. 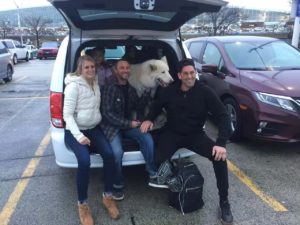 No Dogs Left Behind needs your support so we can report other happy stories such as Ali and Gigi’s story.

Please visit our donations page and give a gift today that will help fund a flight home for the other dogs waiting to get adopted.  We urgently need your support and help to save these dogs today!

Thank you for everyone who believes in us.  We couldn’t do it without your compassion and support!