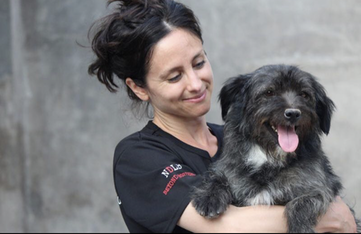 “My name is Jessica and I adopted Johnny from No Dogs Left Behind in June of 2018. I learned about the dog meat trade in April of 2018 and like many who are aware of this “trade”, I was beside myself.

I needed to take action. I searched the internet for organizations who were fighting the trade. I wanted to get to China as they’re the largest consumers. I was eager to volunteer my time as well as grow my four-legged family.. and then I came across No Dogs Left Behind..bingo!

I knew they were the organization I was looking for. I searched their adoptable dogs and kept going back to Johnny. His eyes spoke to me.

I filled out the adoption application immediately after I had been approved to volunteer at their Beijing shelter and booked my flight for June. It was a trip I’ll never forget.

Johnny was brought to the Beijing shelter from the Henan shelter the day after I arrived. I was super excited for Johnny’s transport truck to arrive at the Beijing shelter. I heard Jeff and Dean arrive early in the morning. I popped out of bed, ran outside, introduced myself and immediately headed to the truck Johnny was on.

I helped unload the dogs as quickly as I could because Johnny was in the back of the truck. I’ll never forget the first time I gazed upon his precious little face. This poor baby had been through hell and back. I could only imagine his experiences; his fear;  the pain of being mistreated; hearing other souls being tortured and this little precious baby is staring back at me-  “can I trust her?!”

I start speaking to him and he wags his tail. That was the start of our relationship. I volunteered for 10 days on my first trip and Johnny flew home with me on my first flight volunteer transport. He was a little trooper.

I was terrified for Johnny and the other 7 dogs on my transport. I didn’t know what to expect when I brought him home and I didn’t know how the flight would go. Everything went so well.

No Dogs Left Behind took care of everything. When the dogs are up for adoption on their website they have been treated/rehabilitated/socialized and ready for adoption.

I can’t thank No Dogs Left Behind enough for their work, their dedication and passion for animals and for working towards creating a sustainable future.

I CAN’T THANK THEM ENOUGH FOR MY PRECIOUS JOHNNY!!! He’s such an amazing little boy.

In the beginning, he was hesitant to make eye contact. He was startled at quick/sudden movements. Understandably so. My heart ached for him. I cried every time I saw his broken teeth from chewing on the dog meat cages. I can’t imagine the fear he felt from being stuffed into these tiny cages with terrified, sick and dying dogs.

Johnny along with hundreds of other lucky pups were saved on the 5.05.17 truck that was intercepted before it got to Yulin.

Today, after I earned his trust and he knew he was safe, he’s really blossomed!! He’s full of love and enjoys life!! He loves playing with his toys and just started playing with his brother Lumot. He happily runs like a madman through our home after we come in for walks. It’s the cutest thing.

And when we’re not outside, he loves watching the world go by from my living room window. I cannot put in words my happiness seeing how happy he is. It melts my heart. He will be forever safe from harm and will receive a lifetime of LOVE!!

I thank him every day for coming into my life. He’s an inspiration to me. He learned to trust humanity again after EVERYTHING he’s been through.

Thank you No Dogs Left Behind for my precious Johnny boy!! Keep up what you’re doing. it’s working and Johnny is living proof of that!!”