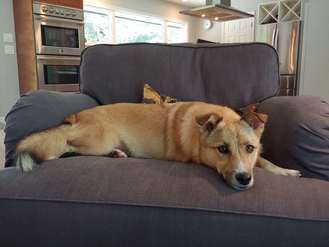 I adopted Blondie from No Dogs Left Behind almost a month ago. She was rescued from the 6.19 dog meat truck and then rescued again when they evacuated the dogs from the Henan shelter.

I had wanted to adopt a dog rescued from the dog meat trade for a long time, but I was worried because our other dog Pico is fearful of other dogs and strangers, and most of the dog meat rescues I had seen were very traumatized.

I asked NDLB IF they could recommend a dog who would be able to live in a house with a reactive dog, and Jeffrey suggested Blondie.

It is scary to adopt a dog you’ve never met, but it really helped that they knew all the personalities of the dogs and could choose one for us.

I was nervous about introducing her to Pico, but she was amazing — very calm and playful, respectful of his space, not competitive or aggressive at all — in fact, she is the sweetest dog I have ever had!

She immediately settled in as one of the family. The most amazing thing about adopting her is that she has helped Pico become a much calmer, more confident dog, something I didn’t think was possible. She is his big sister, and they are inseparable.

Another concern I had before adopting was the amount of training Blondie would need. I was prepared to have to housetrain her, but she was already housetrained and other than taking her out at the regular intervals recommended by Jeffrey, I have not had to do any additional work (and she has not had a single accident in the house!).  They also trained her to walk on a leash, which has made it so much easier to walk her with Pico.

They pay close attention to the health of all the dogs they rescue — Blondie was fully vaccinated, spayed, no heartworm, no parasites — all due to the rigorous health protocols they follow.

I think the real secret to their success is that they get to know the dogs by working with them — their personalities, their behaviors — so the dogs are socialized and can be placed with the homes that are the best for them.

We are so lucky to have Blondie in our family, thanks to Jeffrey, Lia, Deborah, Lavonia, and all the volunteers.