Thank you No Dogs Left Behind For Bringing Jack To Me! 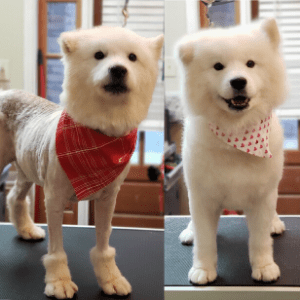 From the moment I became aware through social media of Jeff Beri’s, No Dogs Left Behind Organization and its heroic efforts to crush the China dog meat trade, I felt the “pull.”

As I became more educated through their website and other means, my passion to spread the message grew as did my urgency to volunteer and adopt a dog from China! Finally, I took the plunge!

I reached out to NDLB through social media. Their Director of Adoptions, Brandy responded immediately to my inquiry. She was absolutely lovely. She made the adoption process easy. She conducted the phone interview, provided me with photos and videos of the dogs, and assisted me in the decision making.

I completed the adoption form, provided them with requested information, and within two days, the adoption was finalized. I became the proud  parent of Jack the Samoyed (China Samoyed Rescue)! Brandy completed all the travel arrangements, and two weeks later on November 22, 2019, my precious cargo arrived!